The major takeaway from the Armenian general election is the sheer dominance of the My Step Alliance of Prime Minister Nikol Pashinyan. The group won just over 70% of the votes cast albeit on a turnout of only 48.6% – some 12% down on the last election.

The voting system is a national list with half the seats allocated according to preferences cast in the 13 regions. The results are as follows (1): 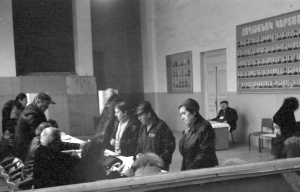 Second, the code requires that a faction that wins more than 50% of the votes cast shall receive a working majority in the Parliament (defined as 54% of MPs). That is clearly the case for My Step Alliance here.

Conversely, the code also limits the parliamentary majority that a single faction may enjoy. No group may have more than two thirds of the MPs. Stripping out the parties which failed to pass the threshold, the raw votes would have entitled My Step Alliance to 84 seats, Prosperous Armenia to 10 seats and Bright Armenia to 7 seats in the 101 seat Parliament. In order to ensure a working opposition, the code requires that additional mandates are created for the opposition to limit the governing party to the two-thirds threshold. Thus My Step Alliance will hold 88 seats, Prosperous Armenia 26 and Bright Armenia 18 in a Parliament of 132. Four seats are reserved for national minorities and, of these, My Step Alliance won 3 and Prosperous Armenia 1. (2)

I wrote about the background to the election here. It followed a largely peaceful revolution in April this year which saw the Republican Party of Armenia lose power and Nikol Pashinyan become Prime Minister. The RPA remained the dominant faction in Parliament, however, with 58 seats. Following these elections, they will have no MPs at all.

The small number of invalid ballots can mainly be explained by the voting system used. Each voter is given an envelope and 11 ballot papers, each representing an individual party. They choose their preferred party and insert that ballot paper in the envelope. The corner of the envelope has been removed to expose a small section of the ballot paper to which a validating sticker is attached before the vote is cast. Thus, if an envelope contains more than one ballot paper then only the one with the sticker attached is deemed valid and an envelope with no ballot paper will have no sticker and will be ignored rather than considered blank or invalid. Invalid votes will be those which have been written on – a comparatively rare event.

The OSCE/ODIHR election observation mission covering these elections produced a broadly positive report on the proceedings, although identified some remaining shortcomings in the areas of campaign finance, the legal system, transparency and gender representation.

The future for Pashinyan’s government will be challenging. Whilst critics from within the Republican Party (not surprisingly) dismiss the new rulers as populists who will ruin their works, the public view of the Republican Party is at an all time low. Other critics, however, point out the lack of governmental experience.

One of Pashinyan’s early moves was an overture towards Turkey. The two countries have had a glacial relationship over the issue of the Armenian genocide. However the Turkish newspaper Hurriyet reported the comments by the new Prime Minister word for word and this will be taken as a positive response.

Another large neighbour – Russia – fired a shot across the bows of Pashinyan in the form of an article in Sputnik News claiming to raise issues about the past history of government members. Russia has a large military base just outside the Armenian second city of Gyumri and, whilst Pashinyan has made no comments which would seem to threaten the future of that base, he does appear willing to upset the status quo in many respects. Laurence Broers of Chatham House has said Armenia is set for future political change in overturning former semi-authoritarian and oligarchic regimes.

“How to do that while maintaining the close alliance with Russia will test the Armenian-Russian relationship severely. But any dismantling of Armenia’s oligarchic ties in many major sectors of the economy, including energy and transport, will inevitably bring Pashinyan into conflict with their deep penetration by Russian state and commercial actors, and their local Armenian clients.”